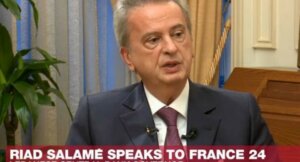 Riad Salameh, the Governor of the Central Bank (BDL), said in an interview with France 24 that he suspects that there was a politically motivated conspiracy to destabilize the country through its financial system. He said that there would be no haircut, the change in the exchange rate is not a BDL policy, and that matters will go back to normal during the course of 2020.

Lebanon has hosted Syrian refugees, which has been costly to the country. Since the war started in Syria, our balance of payments has turned into negative territory.

There has been a change in the political climate in the region. Sanctions have been imposed on a number of countries and organizations. Lebanon found itself in the midst of all although Lebanon itself was not subject of sanctions.

The resignation of Prime Minister Saad Hariri in November 2017 from the Kingdom of Saudi Arabia generated capital outflows from Lebanon to Saudi Arabia and elsewhere, and interest rates started flaring up again.

All this was happening in a country that was already vulnerable because of its recurring and deepening budget deficits caused by a hike in public wages, and there were political reasons. For many months and years, the country found itself without a President and without a government.

As a result, resolutions in support of Lebanon at the CEDRE conference could not be implemented. Rating agencies downgraded the country. All this was happening amidst a number of negative reports that were coming almost daily on its economy, its currency, and its banks, so much so that we believe there has been some sort of a conspiracy that had been along. All this of course destroyed confidence.

When banks closed in October 2019, the majority of depositors lost trust in the banks. We found ourselves in a cash economy. Around 10 percent of deposits were withdrawn from the banks, and were kept in homes and businesses. That of course disrupted the activity of banks.

One easy way for those who want to destabilize the country, and who have a political interest to do so, is to destabilize the financial sector. Since they were not able to destabilize the lira, rumours were spread every week around the banks. We do not have any objective intelligence about that so far but looking at this closely you may wonder why there is this insistence on destabilizing the system. There must be something behind it.

We will not let any bank go bankrupt. We have opened our doors to the banks to access funds in foreign currencies and lira. Depositors should feel reassured that their deposits will be safe in their original currency.

We at the Central Bank are not in favour of a haircut. If there is to be a haircut – which will not be the case – there should be a law passed by the Parliament, which would be unconstitutional, because our constitution preserves private property. I would be against such a law.

The change in the exchange rate at moneychanger counters is not the policy of BDL. It is due to an increase in demand for foreign currency by traders to pay for imports.

We had no choice in adopting the measures we took, which are not different from other countries that found themselves in similar situations. These are temporary measures and we hope we will be able to resume to normal in 2020. This depends on the political climate, not just in Lebanon but also in the region.

Our investigation into transfers abroad is serious and well underway. These transfers are perfectly allowed in Lebanon. We are looking at this from an ethical point of view, if there were some political parties that have transferred money abroad. In such an instance, we may have a case of abuse of power.

Nearly $2.6 billion were transferred outside the country. This included $1.6 billion in trust accounts by foreign banks that have come from abroad originally. This leaves $1 billion that came from resident accounts. That is what we are looking into, as required by law.

If the regional political situation improves and if the country receives support from the international and Arab communities, we will move forward. The Lebanese have huge amounts of cash at home. This should be enough to restart the system. Our achievement is to have preserved that system.