Speaking at the opening of a forum on finance and business organized by Confex, Salameh told participants that Banque du Liban had launched new subsidized loans for 2019, with $500 million allocated for the productive sectors in dollars, and $220 million for housing loans in Lebanese pounds.

It has also allocated $100 million in loans for non-Lebanese residents.

Salameh said the subsidized loans for expatriates would be in dollars, not Lebanese pounds.

The governor also said that Kuwait’s Arab Fund for Economic and Social Development had provided a $165 million loan for the Housing Bank.

“Thus, the total amount for housing loans ranges between $450 million to $500 million for this year, and this does not include the housing loan programs launched by some commercial banks,” he added.

Salameh said the $1 billion package should contribute to 1.5 percent GDP growth in 2019.

The Central Bank governor said the cost of financing in Lebanon had risen, but emphasized that the subsidized loans would help reduce these costs further.

Salameh also said Lebanon’s Capital Market Authority had made progress toward the planned launch of an electronic trade platform.

“We expect the CMA to grant a license to operate this platform in June, although the purpose of this launching is to secure more liquidity for the private sector,” he added.

The new electronic platform will list small and medium-sized companies as well as bonds for the private sector so they can be traded in secondary markets.

“We hope to establish more real estate funds in order to liquidate the unsold apartments, and this would secure more liquidity in the market that can be used for lending,” Salameh added.

He also touched on the support of the digital economy.

“Till this date, around $250 million has been invested in the knowledge economy and there is an additional $250 million which is also available for investment in this sector,” Salameh said.

“BDL has anticipated these matters and beefed up the capital of the commercial banks.

“Thanks to the financial engineering in 2016, the capital adequacy ratio of Lebanese banks has reached 16 percent,” he added.

The governor stressed that these measures had allowed the banks to circumvent the ramifications of Lebanon’s downgrade without affecting the capabilities of these lenders to provide loans. “BDL once again reassures [the Lebanese of] the soundness of the banking sector in Lebanon,” Salameh said.

He repeated that BDL was committed to maintaining a policy whose aim was to preserve the stability of the Lebanese pound against the dollar.

Responding to a question from a member of the audience on the health and social affairs sectors, contractors and hospitals that are waiting on government payments, Khalil said, “Frankly, March is not a secret. It was a difficult month for liquidity, and it was largely handled quietly away from the hype. From Feb. 24 to the end of March, we largely froze about 99 percent of spending that was beyond salaries, wages, debt service and the payment of dues to hospitals, social affairs, health and contractors. The funds will be in their accounts soon after the funds allocated to them have been disbursed. Last Sunday, I worked all day for this purpose, and we injected LL700 billion [$466.67 million] for that.”

Asked if there were clear instructions at the level of political blocs to proceed with reforms, the minister said: “This process is not a luxury. This is a matter related to our survival and our existence. We have no reservations about any action that contributes to the alleviation of waste and corruption and the reconsideration of all existing matters.”

Khalil said there would be no protection for anyone involved any corruption. “But I would like to point out that the nature of our system is rotten: We cannot talk about real reform as long we offer sectarian and factional interests over the logic of citizenship. And so when we reach this, we will have achieved reform,” the minister said.

President of the Association of Banks in Lebanon Joseph Torbey underlined the urgent need to proceed with reforms to pull the country out of its economic crisis.

“The first [reform] is in the electricity file, and the approval of the budget for the current year, with the restructuring of expenditures and imports, leading to a reduction of the deficit rate from 11 percent to 8 percent of output in the first phase, and then reconsideration of the commitment to reduce the deficit to 5 percent of output within five years,” Torbey said. 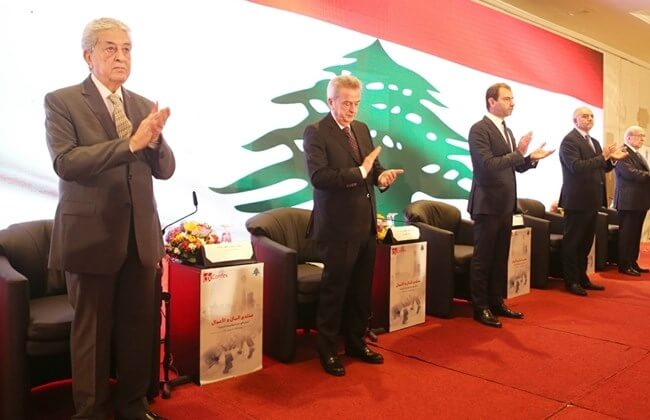