Bonds are issued by many different entities, from the U.S. government to cities and corporations, as well as international bodies. Some bonds, such as mortgage-backed securities, can be issued by financial institutions. Thousands of bonds are issued each year, and even though bonds may share the same issuer, it’s a pretty good bet that each bond is unique.

Learn about the most common types of bonds, and key characteristics of each.

There are other features of Treasuries that are appealing to the individual investor.

Short-term securities that are non-interest bearing (zero-coupon) with maturities of only a few days (these are referred to as cash management bills), four weeks, 13 weeks, 26 weeks or 52 weeks. Also called T-bills, you buy them at a discount to face value (par) and are paid the face value when they mature

Long-term, fixed-principal securities issued with a 30-year maturity. Outstanding fixed-principal bonds have terms from 10 to 30 years. Interest is paid on a semi-annual basis with the principal paid when the bond matures.

Unlike most bonds that pay semi-annual coupons, investors in mortgage-backed securities receive monthly payments of interest and principal. This security is widely traded in the U.S. and other international markets.

Mortgage-backed securities, called MBS, are bonds secured by home and other real estate loans. They are created when a number of these loans, usually with similar characteristics, are pooled together.

>>Example: A bank offering home mortgages might round up $10 million worth of such mortgages. That pool is then sold to a U.S. federal government agency like Ginnie Mae or a U.S. government sponsored-enterprise (GSE) such as Fannie Mae or Freddie Mac, or to a securities firm to be used as the collateral for the new MBS.

The majority of MBSs are issued or guaranteed by an agency of the U.S. government such as Ginnie Mae, or by GSEs, including Fannie Mae and Freddie Mac.

MBS carry the guarantee of the issuing organization to pay interest and principal payments on their mortgage-backed securities.

While Ginnie Mae’s guarantee is backed by the “full faith and credit” of the U.S. government, those issued by GSEs are not.

A third group of MBSs is issued by private firms. These “private label” MBS are issued by subsidiaries of investment banks, financial institutions, and homebuilders whose credit-worthiness and rating may be much lower than that of government agencies and GSEs.

Because of the general complexity of MBS, and the difficulty that can accompany assessing the creditworthiness of an issuer, use caution when investing. They may not be suitable for many individual investors.

Unlike a traditional fixed-income bond, most MBS bondholders receive monthly—not semi-annual— interest payments. There’s a good reason for this. Homeowners (whose mortgages make up the underlying collateral for the MBS) pay their mortgages monthly, not twice a year. These mortgage payments are what ultimately find their way to MBS investors.

There’s another difference between the proceeds investors get from MBS and, say, a Treasury bond. The Treasury bond pays you interest only—and at the end of the bond’s maturity, you get a lump-sum principal amount, say $1,000. But a MBS pays you interest and principal. Your cash flow from the MBS at the beginning is mostly from interest, but gradually more and more of your proceeds come from principal. Since you are receiving payments of both interest and principal, you don’t get handed a lump-sum principal payment when your MBS matures. You’ve been getting it in portions every month.

MBS payments (cash flow) may not be the same each month because the original “pass-through” structure reflects the fact that homeowners themselves don’t pay the same amount each month.

There’s one more thing about those portions you’ve been getting—they are not the same each month. For this reason, investors who draw comfort from a dependable and consistent semi-annual payment may find the unpredictability of MBS unsettling.

Here are some of the most common types of mortgage-backed securities:

The most basic mortgage securities are known as pass-throughs. They are a mechanism—in the form of a trust—through which mortgage payments are collected and distributed (or passed through) to investors. The majority of pass-throughs have stated maturities of 30 years, 15 years and five years. While most are backed by fixed-rate mortgage loans, adjustable-rate mortgage loans (ARMs) and other loan mixtures are also pooled to create the securities. Because these securities “pass through” the principal payments received, the average life is much less than the stated maturity life, and varies depending upon the pay-down experience of the pool of mortgages underlying the bond.

Called CMOs for short, these are a complex type of pass-through security. Instead of passing along interest and principal cash flow to an investor from a generally like-featured pool of assets (for example, 30-year fixed mortgages at 5.5 percent, which happens in traditional pass-through securities), CMOs are made up of many pools of securities. In the CMO world, these pools are referred to as tranches, or slices. There could be scores of tranches, and each one operates according to its own set of rules by which interest and principal gets distributed. If you are going to invest in CMOs—an arena generally reserved for sophisticated investors—be prepared to do a lot of homework and spend considerable time researching the type of CMO you are considering (there are dozens of different types), and the rules governing its income stream.

Many bond funds invest in CMOs on behalf of individual investors. To find out whether any of your funds invests in CMOs, and if so, how much, check your fund’s prospectus.

To recap, both pass-throughs and CMOs differ in a number of significant ways from traditional fixed-income bonds.

There are a number of ways that mortgage-backed securities, such as pass-throughs and CMOs, differ from more traditional fixed-income bonds, such as corporate and municipal bonds. The chart below provides a comparison of a number key bond factors. 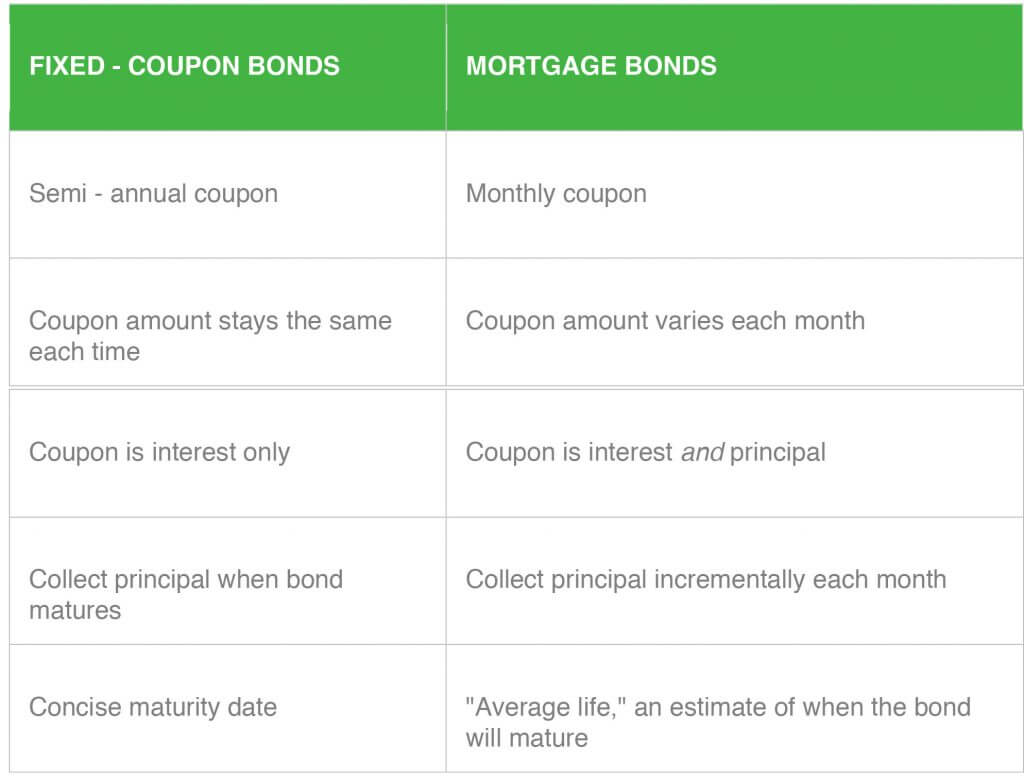